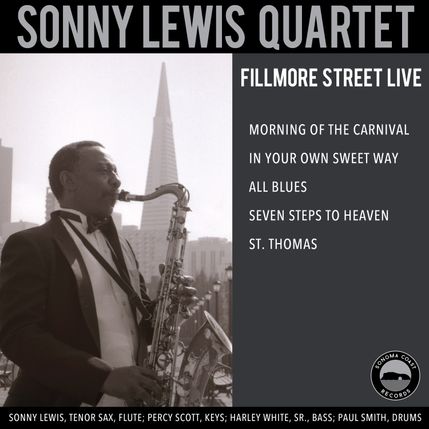 Sonny Lewis is a jazz legend who almost slipped away into history. A superior tenor-saxophonist and flutist based in the San Francisco Bay Area since the early 1960s, Lewis made relatively few jazz recordings during his career. He can be heard with Smiley Winters (playing next to altoist Sonny Simmons and trumpeter Barbara Donald) and on two records with trumpeter Dr. David Hardiman, but until now, no albums have been released under his own name. The previously unknown music on “Fillmore Street Live” is a major find that gives us the chance to appreciate his inventive style and artistry.

Pianist Rob Catterton, who produced the release for his new label, Sonoma Coast Records, met Sonny Lewis at a session in 1987. "I was young and green but Sonny was gracious and very kind. After those sessions ended, I eventually summoned up the courage to call him, and we would rehearse on piano and tenor or flute, just the two of us. Sonny lost the ability to play in the late 1990s due to something called focal dystonia. Despite going to a hand specialist, he had to retire from playing. We’ve remained friends all these years, and recently he brought me 25 or 30 cassettes in a paper bag! They were mostly audience tapes, but two tapes stood out. They were recorded directly from the soundboard at an outdoor fair on Fillmore Street on July 2 and 3, 1988, and they really show what a great player Sonny Lewis was. As soon as I heard them, I knew this material had to be released."

At that point in time, Sonny Lewis had already had a productive career. A professional since he was a teenager in Boston, he gained early experience playing with R&B and rock-and-roll bands. Always a versatile player, Sonny could fit comfortably into almost any setting. After studying at the Berklee School of Music, Sonny spent a period in the early 1960s working in Europe, performing with Bud Powell, Kenny Drew, poet William S. Burroughs, and classical composer Terry Riley, and appearing on the original recording of Riley's “In C.”

After moving to San Francisco in the early 1960s, Sonny created his own combos featuring several young musicians who would go on to fame, including Eddie Henderson and Tom Harrell. During the 1970s he went out on the road, touring with Barry White for a year, gigging with Merle Saunders and Art Blakey, and touring and recording with R&B group The Whispers for over a decade. Sonny played on many of The Whispers’ hit recordings, including three gold albums.

Returning to San Francisco in the 1980s, Sonny Lewis led a series of quintets featuring vocalists, including recording artist Micki Lynn, who was also featured on these dates. The Fillmore Street sessions have already provided enough material to release a full album of incredibly well-played instrumental jazz, and Sonoma Coast Records may be able to obtain the rights to release Ms. Lynn’s set in the future.

Sonny Lewis' quartet includes Percy Scott, a well-known Bay Area keyboardist for over 30 years. Percy toured extensively with the Whispers, and appears playing next to Lewis on one of David Hardiman's albums. Bassist Harley White Sr., an influential educator, has been prominent in Northern California for some time, recording with pianists Earl Hines, Ed Kelly and Jessica Williams, singer Margie Baker, and many others. In addition, Harley worked with all-stars Teddy Wilson, Benny Carter, Dizzy Gillespie, and Sonny Stitt. Drummer Paul Smith recorded with Sonny Simmons (“Manhattan Egos,” 1969), violinist Michael White, bassist Paul Brown, and organist Gerry Richardson. All three of his fine musicians give Sonny Lewis strong support, with each of them taking concise and consistently worthy solos.

Morning Of The Carnival

This vibrant interpretation of the Brazilian classic focuses on Sonny Lewis' virtuosic and creative flute playing. His double-time lines are impressive, as is the advanced theory behind his playing. Percy Scott delivers a fine solo on keyboards, and Harley White Sr. quotes both "Chicago" and "Fascinating Rhythm" during his bass solo.

In Your Own Sweet Way

This track introduces Sonny Lewis' tenor sax with its large and distinctive tone. Sonny makes the reed cry and moan, and each of the musicians, including Harley White on bowed bass, has the opportunity to make a strong statement.

An up-tempo number that features Sonny’s sax sailing effortlessly over the chord changes. The dizzying flow of ideas at a fast tempo shows his virtuosity, which is solidified by both strong accompaniment and solos from the rhythm section.

An innovative interpretation of the Miles Davis classic. Most notable for the leader's explorative, soaring flute, this track includes a particularly inventive keyboard solo from Percy Scott and wonderful interplay between the airy flute and the growling bass line.

The program ends joyfully with a spirited rendition of Sonny Rollins' "St. Thomas," which includes some wailing tenor along with a solid Latin rhythm section powered by percussionist Richard Mann and drummer Paul Smith.

Fortunately, Rob Catterton has additional release plans for Sonny Lewis' music. "There will be other releases in the future including an early recording when trumpeter Tom Harrell was in his band in the late 1960s, and more sets from the 1988-96 period." An important historic recording that makes for an enjoyable listening experience, “Fillmore Street Live” features Sonny Lewis and his musicians in top form.

Scott Yanow, jazz journalist/historian and author of 11 books including

Trumpet Kings, The Jazz Singers and Jazz On Record 1917-76